We want to emphasise that sex-education can prevent teenage pregnancy, but let’s not forget a teen mom is not only struggling with the normal issues of being a teenager, yet another part is facing the responsibilities of an adult!

Teenage pregnancy rates in South Africa are high, with around 30% of teenagers in the country reporting ever having been pregnant. According to the 2015 annual school survey, over 15,000 pupils fell pregnant during the academic year. This is nearly triple the worldwide rate of pregnancy in teenagers. 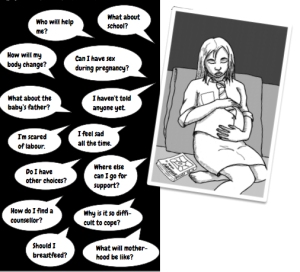 The psychological impact of pregnancy on teenagers is pronounced; adolescents are twice as likely as adults to experience postpartum depression. Another concern is the lack of education, with only about a third of pregnant girls in South Africa going on to finish their schooling. Incomplete education and lack of skills make it difficult for these young women to find work in order to support themselves and their children.

There are a number of physical ramifications to teenage pregnancy – unsafe abortions, for example, can cause injury or death. As a whole, complications during pregnancy and birth are the second leading cause of death for adolescent girls worldwide. But it’s not only them that face serious risks during this period – their babies also have a much higher risk of dying than those born to older mothers.

One way of decreasing the risks to both mother and child is by making skilled antenatal, childbirth and postnatal care available in a safe, teen-friendly environment. This should include counselling with the intent of providing emotional support, mobilising potential resources, and teaching important information about childcare.

A guide to pregnancy, giving birth, and life as a mom for teens

This site uses Akismet to reduce spam. Learn how your comment data is processed.